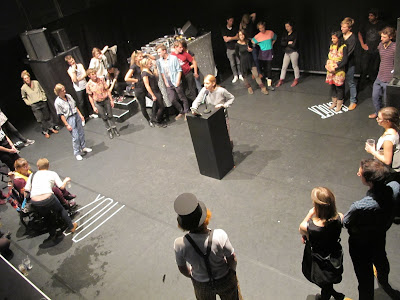 Partysophy/Philoparty comes out of a sustained practice of giving "staged" lectures, which are in themselves only modes of organization of social space – different from those enforced by the standard staging of thinking. This one is a lecture that needs a different kind of preparation, besides reading books or hierarchizing information: meditating, dancing absentmindedly, structuring your daily moods or going shopping with your urgent questions in the basket. Partysophy/Philoparty is a performance set up as spatiotemporal confusion. Bracketed between crowd pleasing DJ sets, it is the staging of a lecture built on the fine border between sophism as "the performance of intelligence" and the intelligence of performance, between wisdom and imitation of wisdom. The performer, be it in the guise of a DJ or in the guise of a "philosopher", is a space-organizer employing technologies for the formalization of diffferent, even antagonistic, community structures. Rhythm is the carrier of social space. The aestheticization of a lecture's rhythm has mainly come to emphasize the hierarchical mode of the "one preaching to the many", even if the message carried by its symbolic content turns against this hierarchy. On the other hand, being slave to the rhythm of a DJ's song opens up a more liberal space, yet one haunted by the totalitarianism of the spectacle. Partysophy/philoparty is affirming both party loving as a more truthful way of being together, and party spoiling, as a necessary distance from the spectacle of entertainment, in itself formalized, much like the aesthetics of wisdom in contemporary academia. The decisive moments are not the party or the lecture in itself but the ambiguous spatiotemporality at the beginning and end, when the space is in process of being restructured from party to lecture, from lecture to party. Applause fades into pop rhythms before it even starts, the content is forgotten having fun.

“Sellers’ The Party, as well as Bunuel’s Angel Exterminador, reveal the thin line between party and catastrophe. Sellers and Bunuel are party lovers, and therefore party spoilers. A party lover spoils the party. Love collapses the world, it causes the world to fall apart. There is an interesting dichotomy between the two films. While in Sellars’ The Party it apparently seems that Hrundi is the cause of the catastrophe, of the collapse of the party, in Bunuel’s Angel Exterminador the party is itself the catastrophe. The second film casts the first film in a new light, it reveals the first film as deceptive. While we are made to think that the human is the catastrophe, that you are the catastrophe, it is the party itself that acts within and through Hrundi, it is the party itself that acts within and through you. The party is a medium, and a medium is something which at the threshold may kill. To fall from a world into another world, from a medium into another medium, from a party into another party, is to commit spatiotemporal serial murders. To radicalize the party is to welcome catastrophe and to radicalize catastrophe is to welcome the party. The one who destroys a party is the one who is destroyed by the party.”