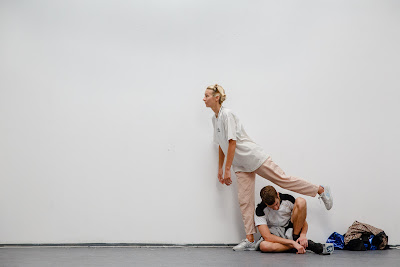 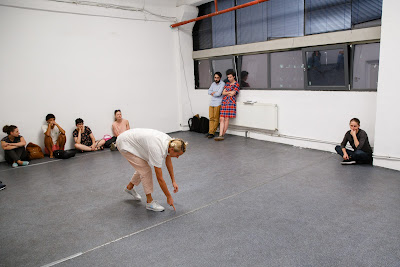 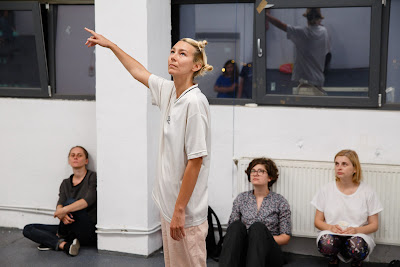 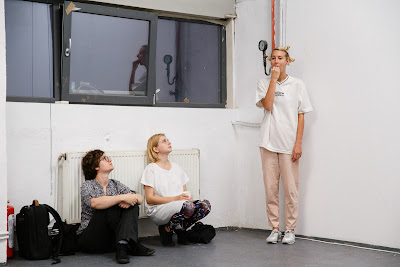 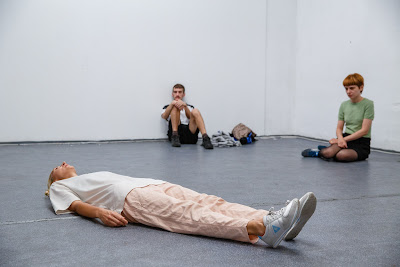 Photos by Roland Váczi
Hypercube Pressed between the Pages of a .pdf curated by Larisa Crunteanu

The performer draws the space, starting from the mouth of the performer, with the index finger and by walking, including herself in the tracing, tracing herself as exterior and interior at the same time. First she draws its diagonals, finds and lingers in the center, and goes along its perimeter, always in straight lines, displacing the audience standing or sitting in her way by using nonverbal sensitivity instead of words or force. The performer is in a state of heightened interiority while drawing the geometry of the space, the gaze is somewhere inbetween the eyes of the performer and the eyes of the audience, always looking straight in front. Towards the end of this tracing, the performer draws the space with monotonous long chants naming basic geometric entitities (point, line, arrow, diagonal, vector), whose slight variations in tone result from the embodiment of a simple representational movement. The performance ideally ends when the audience refuses to move away and the performer is blocked.

The plans of the first theatres, seen from above, draw a circle. The perfect theatre could be inscribed in a sphere, whose absolute stage was the point in its middle. Vitruvius’s plans unfold around the point that was to be contemplated by and from all points of view. The point is the actor, the performer, a moving stage. The theatre has always been a machine for building an interior world. The inside space is a theater built with ruler and pen, starting from the middle point of the stage.

The point of indifference is a weak geometric machine that draws the outside space with the inside space, a dramaturgy of interior duration. It studies exactness with interiority, performance with contemplation, and simplicity with absurdity. A body moving through space becomes a point that must be remembered at every position of its trajectory. The performer is an abstraction and the audience a jungle. Like the movement of capital and abstraction, the performance of this interiorized rationality stands as long as the audience - the social material bodies - endures. A structure emerges only as that which holds vagueness together, at the limit of performance conventions. 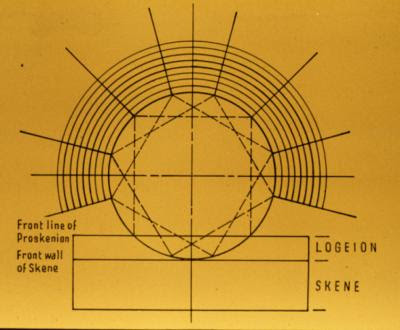 Connected to the performance Unexperiences by Florin Flueras.

Made in Black Hyperbox
Shown at Station Service Belgrade, Alta Studio Prague, and Fabrica de Pensule, Cluj.
With the support of Station Belgrade.